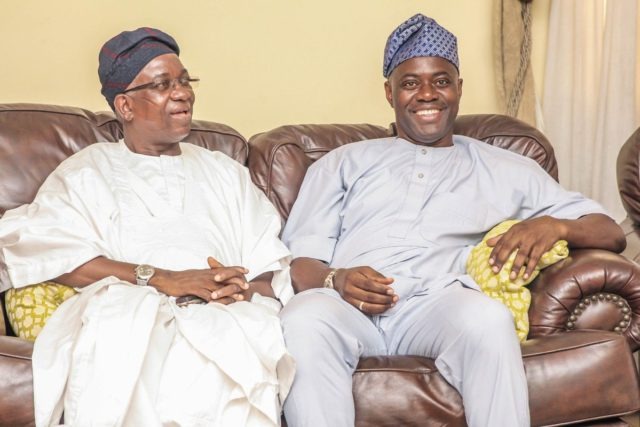 A group, Concerned Muslims In Politics, has reacted to the news making the round that Governor Seyi Makinde is marginalizing muslims in his government.

According to the group, there is no acrimony between Makinde and his deputy, Engr. Raufu Olaniyan.

Our attention was drawn to the above captioned article. As a responsible Muslim organisation we view the damages such report may have on the peace of Oyo state, most especially with the facts contained therein which are very far from the truth.

We do not wish to dabble into what is not our concerns because politicians and conflicts are synonymous and they have a way they settle their differences.  More so, Governor Seyi Makinde has publicly denied any conflict with his deputy, Engr. Raufu Olaniyan.

Oyo state people knew that Engr Seyi Makinde was a Christian before electing him and true to his promises, he has not failed in balancing his appointments into public offices between the two major religions and contrary to the lies contained in the article we are relying on, the Governor, unlike his predecessors has been relating with the deputy Governor better and far beyond other former Governors.

Appointments under the Seyi Makinde administration in the state in general and oke ogun in particular is very fair and so far highly favourable to the muslims.

There are 4 Commissioner’s slots reserved for oke ogun under the Seyi Makinde administration and in due recognition of party leaders, two(2) were allotted to Chief Koleoso and Chief Adetoro and the Deputy Governor nominated a third while Hon. Farinto, being a staunch member of the party got his on Merit.

This gives us 3 Christian Commissioners and 1 Muslim from Oke ogun. Apart from Hon. Farinto, the Commissioner from Saki and Igbeti are Christians while the woman from Iseyin is a Muslim.

So far, there are two Special Advisers/SSA to the Governor from Oke Ogun, (1) Muslim from Sepeteri and (1) Christian from Irawo.

The Governor has three(3) Special Assistants (Federal Constituency) from Oke Ogun, all the(3) three are Muslims.

On Chairmen of Commissions, Boards and Parastatals, four Chairmen come from Oke Ogun.

The Muslim Pilgrims Welfare Board, House of Assembly Service Commission, Housing Corporation and Arts and Culture. Apart from the Chairman Arts and culture, the(3) three others are Muslims. The Deputy Governor, apart from nominating a member from Igboho, Imam Jamiu Kewulere was also in constant talks with the Governor towards constituting the Pilgrims board.

There (3)are three Permanent Secretaries from Oke Ogun under the Makinde-led Administration, the PS from Iseyin is a Christian while those from Itesiwaju and Orelope are (2)Muslims.

To negate the impression of sidelining the deputy Governor in the running of affairs of Governance, Unprecedentedly, the Governor approved nine(9) Aides for the Deputy Governor and he singlehandedly fixed those aides by himself.

This is apart from the fact that the Governor allowed him to appoint not less than(10) ten out of the 18 Local Government Chairmen from Oke Ogun. It is on record that the immediate former Deputy Governor only got (4)Aides without even honouring to appoint even the Chairman of his Local Government area.

The Governor has paid hosts to head of Muslim bodies just as the Christian’s. The leagues of imam and Alfas from Oke Ogun have visited the Governor likewise imams from Ibadan and other parts of Oyo state.

We feel the need to go this length because we do not want the Governor who has been fair to the Muslimfolks to be wrongly judge to be biased against the Muslims because he is not.

Those who think they can hide under a veil to cause a religious disharmony should look elsewhere because Governor Makinde will never deny any religion their dues both Administratively and Politically.

Iseyin’ll Get Tertiary Institution Before End Of 2019 — Lanlehin

Is There Juju In Sport? My Baptism | Segun Odegbami