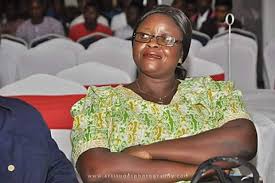 Folake Otuyelu, a former on-air-personality at Splash FM, Ibadan, has revealed that she left her job and relocated to the United States because she was almost murdered.

Otuyelu, who was known for her rich understanding of Yoruba language on various program at Splash FM, especially Tifuntedo, disclosed this in an interview Edmund Obilo.

When asked about the identify of those chasing her, she said, ” I don’t even know how to put it, maybe those people that were not comfortable with the news that I read. I’ll say the politicians and the Islamic sects. I don’t know maybe you remember there was a time the Islamic sects came with a placard and said the way I read the news, it seems I am rubbishing their religion and things like that.

“But what these people don’t know is that the news were not made by Folake, Folake is not even the news editor, Folake is just reading what she sees in the newspaper, it’s not for her to add or remove.

” But many don’t believe that, maybe we need to enlighten our society more.”

When Edmund Obilo asked further that some would say that she gave her own reading to the stories she read on the program ‘tifuntedo’, she said,
“I never did that but one thing about Yoruba, the language I use is that, Yoruba language is very rich and we have these proverbial words that we use to qualify things that are very very rich and when you use these proverbs it could give a different meaning to a particular word.”

She stressed further that it is the same news read in English that is presented in Yoruba but English language allows the reader to give more explanation.

While responding to question on whether her rich control of proverbs made people attacked her, she said,

“There is a particular word that caused a lot of problems for me during the course of my career as a journalist, we have this word that we use for someone that is being referred to as a controversial person and he Is always in the news, the controversial so, so, so, is in the news again.

“When they say somebody is controversial it means that person is always in the news and they always talk about that person and you can’t do without talking about the person.

“When the English presenters talk, they will just say the Controversial…and when Folake comes with Yoruba, she will say Eni ti enu e si n Lara re bi afokemo, which still means the same thing as controversial and that is just the beauty of Yoruba language.

“A lot of threat letters, they want to kill me, to the point that they started harassing me on the road, stopping my vehicle. I have been drawn out of a vehicle before (and) dealt with. I have been met one-on-one in the house and that was when I know I had to leave the house, it became unbearable. It became so tough with me.

“At a time, I start to ask, am I the only journalist in the town? Am I the only one doing this? Because there was a time I had to go to another state very close to Oyo State, I was part of the panel that will conduct an interview for the governor of that state, and the moment I mentioned my name he said, you again! And I said, me again what sir? And he said, they have sent you to this state again and I said, I don’t have anybody sending me about. He said okay and the first question I asked him, he just threw it back at me, which means it is not only in Oyo State but other states too.

“There was a time the Chairman of the Station told me to go and report at the police station and I said no I know the type of security men we have in Nigeria. Instead of them to save me, they will sell me out.”

When asked if that was not too hard on the police, she said, ” I know because the first report I made, when I went to make the report, the first thing I heard is you have a sharp mouth, you talk too much, you do this too much, and I said I think you should be more educated than what you are saying but the person went further and said, one thing I want you to know is that a whole Attorney General was murdered like a chicken and even up to now we are unable to unravel the killers not to talk of an ordinary journalist.”

She also noted that the kind of leaders in the country are bad and cited an example of the pandemic where countries like the United States have given palliatives to people and also provide food tanks in strategic places for people who need food to take it unlike in Nigeria where a lot of donations have been made to the government yet the people are not feeling the effect.

She added that there was a particular thug who told her that he wants to kill her, so, she had no choice but to leave the country to save her head because she is still very young and not ready to die.

Who Will Tell Makinde What Modernity Means? | Morufu Smith

Many Injured As Herders, Farmers Clash In Ido Community