Shooting Stars FC on Wednesday evening recorded its first loss at the on going Nigerian National League(NNL) against J.Atete FC by a lone goal.

The match, as of the week five fixtures, was played at the Otujeremi township stadium with its attendant drama.

The drama ensued shortly after the warming up when it was discovered that the two teams were going to appear in similar colours of jersey.

Although, that was not the situation in the morning during the pre match meeting still J.Atete played its antics well and Shooting Stars had to change its colour according to the rule, being an away team. So, the players settled for available training jerseys!

Then, the drama continued. The home fans were trickling in freely, unhindered ( in fact, no gate takings) into the stadium arena but no police presence except for some men who appeared in EFCC T-shirts!

The intimidations continued unchecked from the fans and Shooting Stsrs Team Manager, Dimeji Lawal had to call the attention of the Match Commissioner with insistence that his players would not play under unsaved condition until there were required numbers of police personnel at the stadium and also the ambulance!

In the course of all this, a police constable (Edore U) rode in on ‘okada’ into the stadium and started pleading for understanding.

He disclosed that some of his colleagues (who were assigned for the match) had accosted the prisoners to court, they would join in the course of the match.

By this time, the match was already 40 minutes behind scheduled. The Match commissioner, the police constable and player / chairman, Mr Julius Atete , pleaded with Shooting Stars officials, Rashidi Balogun and Dimeji to shift grounds and allow the game to start.

Both had to conditionally agree as the home fans were becoming more agitated in an already charged atmosphere.

However, the teams filed out and the match started at 4:52 pm when first half would have ended.

The first 15 minutes had the Atete Boys in control but Shooting Stars defence line of Omololu Waheed, Abbey Benson, Amodu Nurudeen and Taiwo was resolute.

Additionally, goalkeeper Lucky Jimoh had to make some daring saves to keep a temporary clean sheet.

From about 20′ into the game, the attacking instincts switched to Shooting Stars and the duo of OpeOluwa Olufemi and Sanni Nuru were reigning supreme from right and left wings of the pitch.

The midfield controls with passes from Moses James and Fatai Gbadamosi to Akombo Ukeyima upfronts were becoming problematic for troubled J.Atete defence.

One such moves that may have resulted into a goal for Shooting Stars was thwarted by a dubious whistle from a fan very close to the home post.

Sanni Nurudeen in his usual style had latched on to a pass from Fatai Gbadamosi, he dashed off three defenders and was about to put the final touch in the box before the whistle stopped him.

The Centre referee was surprised while some of the home fans pushed the culprit away in apparent pretention.

Few minutes later first half ended goalless. Both teams could only have few minutes rest as they returned to the pitch at 6 :00 pm.

This time only two mobile police officers had joined the constable! Shooting Stars’ Rashidi Balogun called the attention of the MatchCom and was assured that the match should continue.

The match resumed at 6:05 pm and was balanced until 56′ when J. Atete striker, Akpokovware Ebhre capitalized on momentary loss of concentration in the defence to score.

The changes added more freshness into the attacking forays and put the Shooting Stars in firm control. More attempts and set pieces were at the visitors advantage until J.Atete put up series of other antics.

Apart from arbitrary falls of almost all Atete players, the playing balls were reduced to just one immediately after their goal.

At the same time, the whistle blower too could not stop and that was the situation until the referee called off the match on the dot of 90 minutes without added time at 6:50 pm. 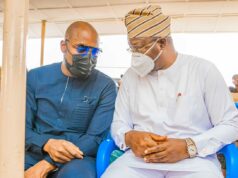 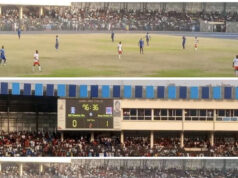 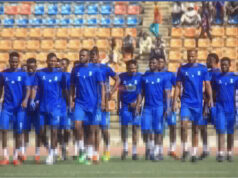 NPFL: Traveling Two And A Half Days Affected Our Chances In Gombe — 3SC Coach, Agoye