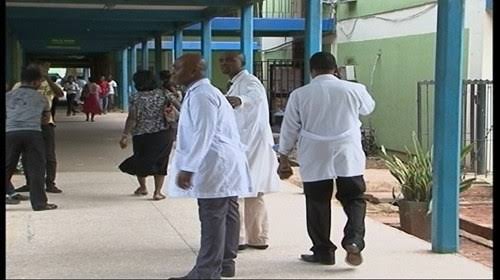 The Association of Resident Doctors (ARD), Ladoke Akintola University Teaching Hospital, Ogbomoso has issued a 14-day ultimatum to the state government and its management to correct all anomalies bedevilling the institution.

This is contained in a statement jointly signed by its President, Dr Abraham Akintola and General Secretary, Dr Abubakar Usman

The association in the statement made available to the News Agency of Nigeria (NAN) on Thursday in Ibadan, said the ultimatum commenced from June 11.

The ARD threatened it would have no option than to embark on strike if their demands were not met at the expiration of the ultimatum.

It said that the decision to issue a 14-day ultimatum to both the management and state government was reached at its last ordinary general meeting held on June 9.

“At the last Ordinary General Meeting (OGM) of the association held on June 9, 2020, it was decided by congress that enough is enough.

“Congress therefore decided to give the  hospital  management and state 14-day ultimatum starting from June 11 to correct all anomalies bedeviling LAUTECH Teaching Hospital, Ogbomoso once and for all.

“The congress also resolved to down tools at the expiration of the ultimatum until such demands are met. A stitch in time can still save nine,” it said.

The association said the last straw on the teaching hospital’s camel was the negligence from the present administration, saying they are tired of being put at the back doors.

“The change of government in Oyo State was welcoming news to these health workers with the hope that this dispensation would sprinkle joy to the people of this institution.

“We embrace this with all eagerness. Our target was to meet His Excellency and to present our daunting challenges. We never got that opportunity.

“We engaged prominent members of this administration including the deputy governor, secretary to the state government, Head of Service while many letters were delivered to the Oyo State House of Assembly leadership but all to no avail,” it said.

The ARD said that they have explored all the means they knew but seems their neglect was deliberate.

According to the association, “We will not stop to put the public into perspective in all our struggles and do hope this cycle ends for good soon.

“We want the state governor’s attention in the teaching hospital to stop the death knell spiral the hospital is spinning to. Our agitations have not changed.”

NAN reports that among their demands are improved salary scale of doctors to corrected CONMESS which other health workers in the country have been enjoying since 2014.

Also listed are payment of new minimum wage to them as being enjoyed by other state workers since January 2020 and urgent  payment of their two years half salary arrears for January 2016 to December 2017.

Others are installation, repair and maintainance of their sophisticated medical equipment for upmost service delivery, and employment of new staff as well as medical staff to lessen their burden.

NAN also report that the association had issued several statements to press home their demands both during the immediate past and present administration.

CORONAVIRUS: Group Asks FG To Include Oyo In Funding — Makinde’ll Protect State Despite...

Youth Investment Fund Will Give Economic, Political Power To The Youths — Olaosebikan