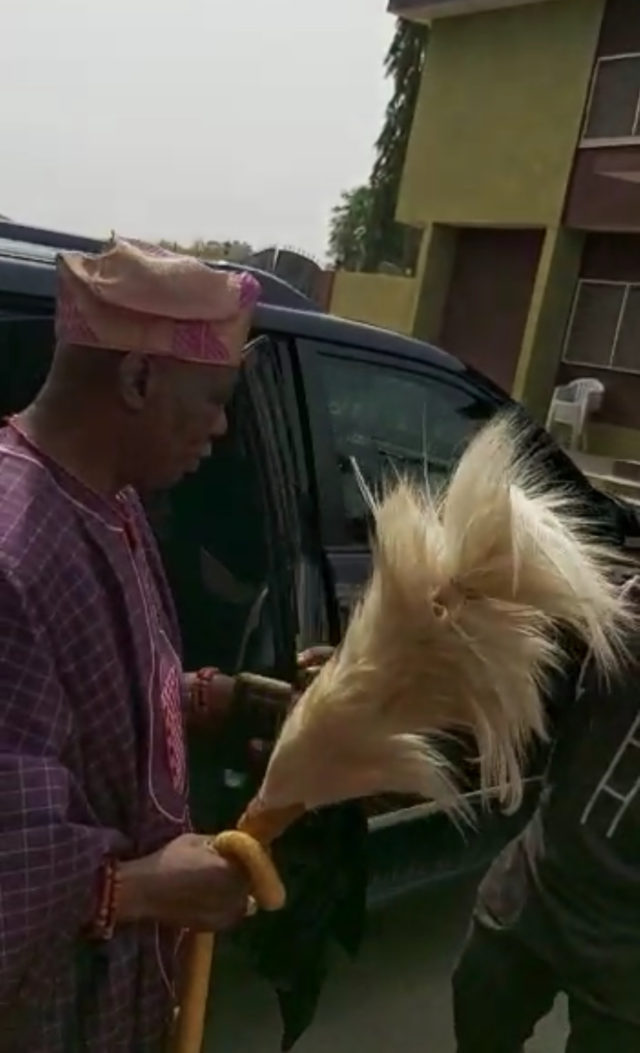 Three months after the Supreme Court sacked him as Eleruwa of Eruwa, Mr. Samuel Adegbola made a shocking return to the palace last Saturday.

A video obtained by OYOINSIGHT.COM showed him being driven into the palace in a black Toyota Jeep, accompanied by people suspected to be hired thugs who rode motorcycles.

Though the mission behind his return was unknown as at press time, this newspaper observed that the monarch, decked in a tea-colour agbada with his ‘irukere’, was ushered into the palace with pomps.

Sources who confirmed that the sacked monarch returned to the palace said he had only come park his personal effects to his newly completed apartment in Eruwa.

Another source said that “The information I gathered was that he left the palace late yesterday night to sleep in his personal house and planned to resume back to the palace this morning.”

OYOINSIGHT.COM had reported how the apex court sacked the former monarch 21 years after he ascended the throne.

This was after an Oyo State High Court had on January 26, 2011 removed him. But not satisfied, he appealed the judgement.

The sacked monarch was installed the Eleruwa in 1998 by the Oyo State Government amidst protracted protests by members of the rightful ruling house after the last Eleruwa, the late Oba Bolanle Olaniyan, who is from the Akalako ruling house, passed on, on May 1, 1994. Although his nomination and selection by the kingmakers were challenged by the Laribikusi house, which argued that he was not a member of the ruling arm, but belonged to Akalako where the previous king emerged, the state government went ahead to inaugurate him, prompting the present action.

Those who challenged the authenticity of Adegbola’s claims to the throne are Mr. James Olatunde Idowu and Alhaji Ajao. Joined in the suit besides Adegbola are: the Governor of Oyo State, the Attorney General, Ibarapa Local Government, Chief Jacob Adewusi, Chief Femi Atanda, Chief Idowu Okeowo, Chief E. Ojebisi and Mr. Kasali I.

The plaintiffs, represented by the lawyer, Alhaji Lasun Sanusi (SAN) sought eight reliefs in their statement of claims which were all granted by the court. Having summarized all the submissions of the counsel to both sides, Justice Abimbola resolved all the issues in favour of the plaintiffs.