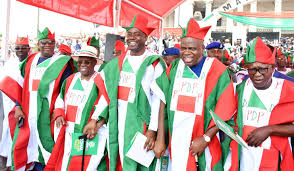 The Chairmen of Peoples Democratic Party, PDP, in four South West states have alleged that Governor Seyi Makinde, Chief Bode George, Senator Hosea Agboola and some other members of the party are plotting to remove the current National Chairman of the party, Uche Secondus.

The chairmen, who revealed this in a letter addressed to the party’s National Chairman dated June, 19 2020, also stated that the simmering crisis in the party is fuelled by the ambition of of Chief Bode George and Senator Hosea Agboola to become the National Chairman and National Vice Chairman respectively.

They also frowned at the stakeholders meeting of the party in the South West held at the behest of Governor Makinde in Ibadan last week Friday without any recourse to the Zonal Executive of the party.

It read, “We the undersigned are party Chairmen in States of the South West Zone and we feel duty bound to alert you on the need to forestall the festering of any crisis in the South West zone of the party.

“This action becomes necessary in view of the new schism rearing its head in our zone. It is our immediate concern to ensure that all hands are on deck to halt the growth of needless crisis that will negatively affect the health of our party in the South West Zone.

“In this respect, we take due notice of the invitation to a purported South West Zone meeting which held on Friday, 19th June 2020 unilaterally summoned by His Excellency, Engr Oluseyi Makinde, with no recourse whatsoever to the Zonal Executive. This development if not arrested may signal the beginning of terrible developments in our zone.

These two men are exploring their closeness to Governor Seyi Makinde to prosecute inordinate ambition at the expense of the existing amity and understanding within the South West Zone which is currently being disrupted for this reason.

“We urge the National Working Committee to take immediate action geared at forestalling unnecessary crisis in our Zone by calling the aforementioned men to order and educate them on the need to play by the rules and not create any trouble in the zone.

“We also wish to place it on record our confidence in the Zonal Caretaker Committee to discharge its constitutional responsibilities exquisitely and will always support them in this regard.

“Our interest is majorly to ensure that our party is insulated from any unnecessary crisis and therefore urge Your Excellency to take immediate actions in this respect.”

Shittu: Ajimobi Wants Me To Be Forgotten, Presidential Aspirants Reaching Out To Me