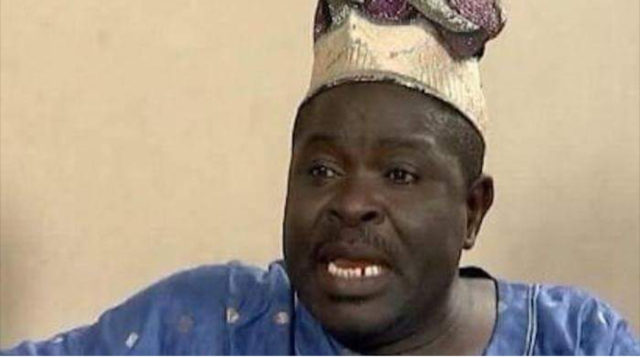 Multiples sources, who spoke with OYOINSIGHT.COM, said he died early this morning at his Imalefalafia, Oke-Ado, Ibadan home.

Only few months ago, the actor had called on the public to come to his aid as he needed their financial support for an heart surgery he must undergo.

Ogun Majek had disclosed in an interview with OYOINSIGHT.COM that he had been struggling with an heart disease for some time and he must undergo a surgery.

He, however, did not disclose the exact amount he need for the surgery because he believes it might scare people away, but, he called on people to support him with anything within their capacity.

He, however, confirmed that a governorship aspirant on the platform of the All Progressives Congress, APC, in the 2019 election, Engr. Joseph Tegbe, has credited his account.

Can we meet you, sir?

My name is Gbaloagade Akinpelu, popularly known as Ogun Majek.

When did this start?

It has been a while that I have been nursing it. I initially thought it would leave early.

Like how many years have you been nursing it, sir?

That’s between six to eight months.

What are the steps you have taken since it started?

I have taken a lot of steps. In fact, I have been at UCH since then and I was admitted there twice. My admission at UCH lasted for months and weeks respectively but we thank go it did not get out of hand.

The issue is that I don’t have much financial capability. I, initially, did not want to talk about it that’s I have been spending the little I have to take care of myself.

However, when we became overwhelmed, we had no choice but to seek help. And, again, you can also see that when the body becomes weak to a certain extent there is little we can do than to ask for the support of Nigerians.

I am grateful that Nigerians have started to support me. I thank all Nigerians for their support.

What do you want Nigerians to do for you? Like how much do you need to take care of your ailment?

I don’t want to say the amount I need precisely because if I disclose it, it might discourage some people who might be interested in helping me.
But, if people can give me any amount they have, I am fine with it. I also thank those that have supported me so far. Their contributions have been of immense importance.

I am not one of those artists that go and start seeking supernatural powers to become famous. Since I became famous in 1973, with God’s help,

I have maintained that name till today because I do only the things I am capable of.

You said you don’t want to disclose the amount you need but can you tell us what the ailment is?

It is heart disease. We all know how heart disease works when you take drugs it will work for some time after which it won’t work again.

A lot of senior health practitioners are currently working on my case, including trado-medics but everything all comes down to my financial strength. Money is the only problem I have but I thank God.

Those defaming themselves saying they have died are wrong because I survived and I am not dead.

So, I call on people to support me financially with anything they are capable of. I pray their source of income would never dry up and no illness shall befall them or their family members.

In conclusion, when did you start acting and when was the last time you featured in a movie?

I started acting in 1963. I still acted like two to three scenes in a movie produced by one of the boys I trained earlier this year. The reason I did that is that I don’t want a situation whereby people would begin to think I have ceased to exist. In fact, the movie is yet to be released.

EXCLUSIVE: Alao-Akala To Produce SSG, 2 Commissioners, Olamiju To Be Returned If…

How FG Can Reopen Schools, Varsities In Oyo, Other States Within 4 Weeks ...