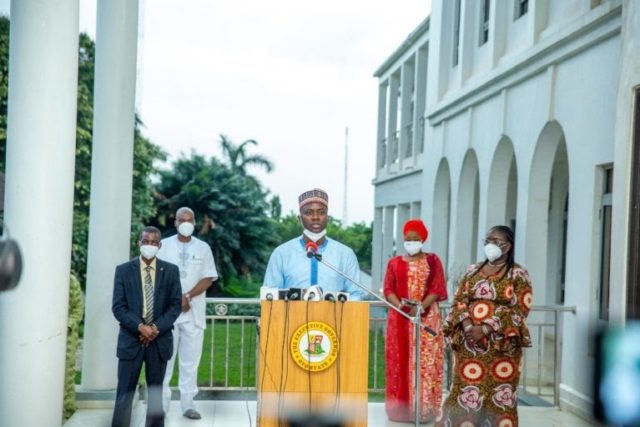 As anxiety continues to mount over the non-disclosure of the company where 30 employees tested positive to coronavirus, residents have asked Governor Seyi Makinde to declare the identity of the company.

The said company is said to be located in Ibadan South West local government, a disclosure that has made all eyes to be on multi-nationals at Oluyole industrial estate.

OYOINSIGHT.COM had reported how 30 cases of COVID-19 pandemic had been discovered out of 31 employees of the yet-to-be name company tested.

The number, this newspaper undertands, is the highest the state has recorded in a single day. It dramatically shot up Oyo State’s COVID-19 figures to above the 100 mark.

This is just as OYOINSIGHT gathered that over 100 others have been tested and awaiting results today in line with the protocol already established by the Virology Laboratory of the University College Hospital (UCH), Ibadan,”

Residents who spoke to this newspaper said it becomes imperative for Makinde to disclose the name of the company so that people who might have contact with it or any of its employees would begin self-isolation so as not to infect others.

Though the state had announced the shutting down of the said company, a public affairs analyst, Dr. Bayo Busari said it was wrong for government to withhold information and allow people to speculate.

According to him, “It will do more damage to companies along that corridor. Again, it will allow further spread as those who have been to the affected company may not immediately observe the protocol. One way or the other, before people will find out, the purpose of withholding the information would have become defeated

“Most people who work along that corridor do so under inhuman condition. They all patronize makeshift food vendors. Perhaps, govt may go a step further by cordoning off the entire area because of the proximity of the companies in the area and the interaction that occur daily among the categories of people who eke out their daily sustenance within the area. I’m afraid the entire Oluyole area may have become endangered,” he added.

However, in his own view, Sulaiman Abiodun Oyaremi explained that the government might have acted in the interest of both the public and the company.

According to him, “If the company involved is a manufacturing company, the stigma effect of naming the company may live beyond the pandemic era, and such may permanently damage a reputation built over some years for the company in one part, in another part, all the relatives of the workers in this company (either tested positive or otherwise) may also suffer stimatization at the hands of those who know about their family members working therein.

“Of course, people can argue it is not like this in other clime, that’s perfectly right! In that other clime, people play, eat and live with people with HIV without stigmatization, is it same here? Until we learn how to domesticate and localize both our developments and approaches to issue, simple solutions to problem will keep eluding us.”

He, however, advised that simply saying little about the company may douse the tension because if public is aware that the company involved is an high-end service company and not a manufacturing company that interacts and has large costumers that also sell retail product, the fear they would exhibit will be little.

‘Damola Adeoye, an Ibadan-based journalist, in his own reaction, said he was not at home with Oyo Government’s decision to continue maintaining anonymity for the said company.

“For crying out loud, there are hundreds of companies and factories in Ibadan Southwest local government, with about four or five heavy industries with large traffic.

“By continuing to keep the said company’s name under wraps, govt is only fuelling rumours and innuendos, which is totally unhelpful during emergencies.

“Mention the company, and let those who’ve had dealings with them in the last 14days or thereabouts proceed promptly to self isolation. We cannot prioritize populism over public health!.”

But Mrs. Yemi Taiwo-Alabi has another dimension to the issue.

According to Taiwo-Alabi, who is also a public affairs analyst and author, said that disclosing could help those who had been in contact to check themselves, quarantine/isolate to prevent further transmission

“But on the other hand, it could lead to stigmatization, it could kill the brand and lead to increased unemployment and loss of revenue to the state.

“Perhaps if our state government had taken steps about 3-4 weeks ago when the workers in these facilities raised alarm on the management apathy to their safety, maybe we could have brought this under control.

“As it is now, there are no easy routes out of the situation.