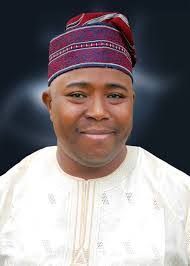 The governorship candidate of the Zenith Labour Party (ZLP) in the 2019 general elections in Oyo State, Chief Sharafadeen Alli on Thursday prayed for a quick recovery to former governor Abiola Ajimobi who is currently receiving treatment over an undisclosed ailment.

Alli, said “the former Governor should be remembered in our prayers.

“We must collectively stay safe and observe all regulations prescribed by the Nigeria Centre for Disease Control (NCDC) and other stakeholders during this ongoing global pandemic,” Alli said.

He also warned the Governor of the state, Engr Seyi Makinde to tarry and seek professional advise before considering reopening of Schools, religious organisations and government offices.

Alli said opening schools, government offices, churches and mosques at this critical time is dangerous and an open invitation to risking lives of the good people of the state when the number of coronavirus victims is increasing on the daily basis.

He wondered what necessitated the impatience on school reopening especially when examination coordinating bodies (WAEC and NECO) are not in a hurry to commence the exercise.

Alli, in a statement he personally signed in Ibadan on Thursday pointed out that Nigerians were taken aback and marveled when the Oyo state government announced its readiness to reopen schools and religious organisations in a few days time when other states are still putting heads together on how to find a lasting solutions to the ravaging pandemic.

According to the former secretary to the Oyo state government, “this decision is unguarded, untimely and insensitive at the time the whole world is battling to find a lasting solution to the issue of covid 19.

The statement reads in part:”It is good to consider reopening of schools, but not at this time that the number of coronavirus victims in Oyo state is increasing. Moreso when it is obvious precautionary steps have not been put in place to forestall further community infection in the schools and public places.

” I will advise you to tarry and seek professional advise before taking such a step.”

Alli also pointed out that currently, people’s adherence and enforcement of the existing regulation is very poor.

“I want you to study development in other states in Nigeria where the governors are not in hurry to take steps that may later backfire.

“Even the South Korea and Israel opened schools but had to close again when covid-19 cases spiked in those countries.

” Lives of our people are very precious and we expect the governor to treat them as such,” Alli further counseled.