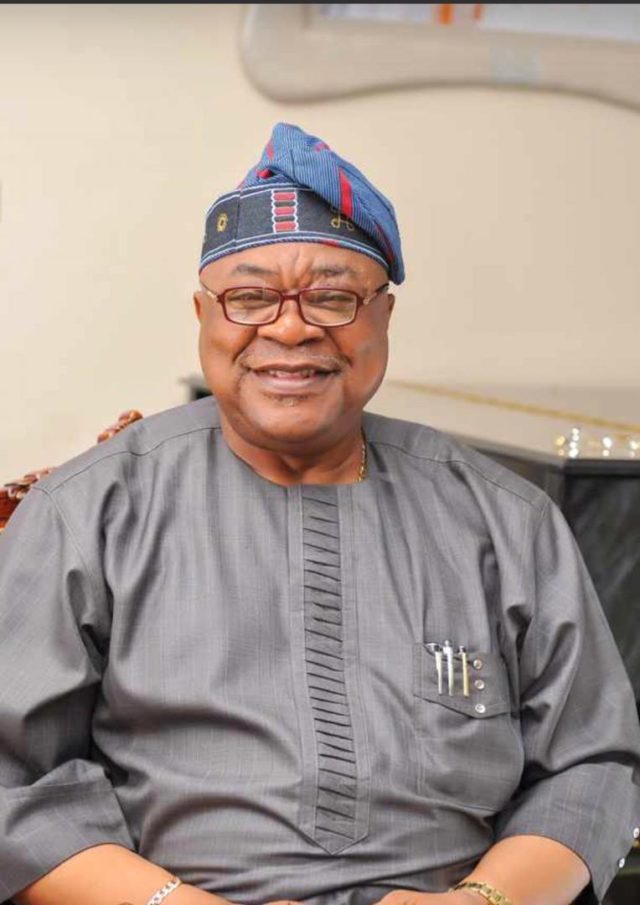 Christopher Adebayo Alao-Akala is 70, or so I hear. The sudden beatification of the man by the ‘progressive’ wing of South West politics today is, for me, thesis-worthy. This was a man who, years ago, infamously “…brought illiteracy to governance and represented everything retrogressive and demonic in Oyo politics.” We may come back to this some other time.
.
But there is a now viral photograph of the man that I find a tad fascinating: image of the man and former governor Abiola Ajimobi locked in a friendly embrace, their hands interlocked in a show of genuine camaraderie, the latter grinning from ear to ear, and the former, quite expectedly, decked out in ostentatiously flamboyant ornaments. Although their skin colours and body texture differ, significantly even, both men seem united not only by a deliberate desire to bury the (political) bitterness of the past but also by an outlook that effortlessly advertises the absence of lack——a luxury alien to millions of people they both governed at different periods in Oyo’s chequered history.
.
Of course, because the present is meaningless when stripped of the past, it is important that one situates this photograph within its appropriate contextual background. And the one event that I consider apt in the immediate took place a decade ago, in the days leading to the 2011 guber elections.
.
Venue was the historic Mapo Hall, Ibadan, and the event was, I think, the grand finale of the then rampaging ACN’s guber campaign. On the bandstand was ACN-APC’s favourite, Wasiu Ayinde Marshal (Kwam 1), and on the big stage were party bigwigs: Tinubu, Oshiomhole, Amosun, Aregbesola etc. At the time a nosy student of journalism bent on staying atop the news, I made it to the venue and was tucked somewhere in the crowd.
.
I cannot immediately recall what the ACN bigwigs said any longer because, typical of campaign rhetorics, a bunch of those things were fanciful taradiddles. But ten years on, one thing remains stuck in my memory about that campaign outing: Kwam 1, no ideologue by every stretch of the imagination, spent the entire campaign session hurling abuse and insults and curses on then incumbent Gov. Alao-Akala and his ruling PDP. At some point, he threw caution to the winds and went for the jugular, with the enthusiastic crowd, led by candidate Abiola Ajimobi and other bigwigs, raising their trademark brooms in the air and echoing the Fuji act, thus:
.
“Ofo ni o she o
Ofo ni o she (X2)//
Eni ba d’ibo f’Akala o
Ofo ni o she o//

//Tirela/Ajagbe-ejo ni o pa o
Ofo ni o she…//”
.
Yoruba loses its flavour when translated but if done roughly, the above goes thus:
“Woe betide him//
May he be unfortunate (X2)
Whoever votes/supports Alao-Akala/
Woe betide him

Whoever votes in PDP//
Woe betide him

May he be crushed by lorries/trucks
Woe betide him//”
.
Against the backdrop of that tense campaign rhetoric, matched also by an equally provocative campaign rhetoric by the Akala team elsewhere in the state, a face-off ensued at Beere-Oja’ba junctions hours after, with supporters of both parties matcheted in a violent struggle for dominance. I found my way back to Ramat Hall of Poly Ibadan by luck that memorable day. Unconfirmed reports said there were reprisal attacks in parts of the state, and a few fanatic supporters of both Ajimobi and Alao-Akala died in the melee.
Caught in a royal rumble with prominent traditional rulers across the state, Akala, whose image had been battered with the spread of numerous near-apocryphal tales (Indomie hoax, Guru Mahraji’s walking stick and so on) fought the battle of his life in that election. At some point, his campaign team had to poach veteran broadcaster Bolade Salami, a move that marked the genesis of the state-wide Eleti-ofe programme on BCOS, a direct response to SPLASH FM’s popular programme, Tifun-Tedo (Students of broadcasting of that era would remember the historic ‘Talope Talota o?’ punchline no?). Yet, Ajimobi won that election, defined largely by a deliberate demystification of the Alao-Akala persona by, first, Rashidi Ladoja’s viral documentary video of the 2006 impeachment saga, as well as a brilliant propaganda machinery put in place by the rampaging ACN.
.
After Ajimobi’s victory, expectedly, it was also Kwam 1 who first showed how stupid it is to fight on behalf of any politician. At a social event in Ibadan, held not too long after the 2011 ACN-PDP bitter rivalry, the Fuji act spent hours eulogising Alao-Akala with superlatives that made nonsense of those the late Awo enjoyed after death. In the years after, there have been alliances and re-allignment deals, consummated as though they were designed to mock the foolhardy among fanatic supporters who died across the divides: Alao-Akala and Ladoja holding secret meetings to form a coalition against Ajimobi’s re-election bid in the PDP; Ajimobi and Alao-Akala coming together in the APC; Alao-Akala and Teslim Folarin (theirs was another bloody Kiriji war that took the life of the notorious NURTW kingpin, Elewe-omo, and numerous other unnamed folks. The story may be told some other time) engaging in tete-a-tete as APC stalwarts; Makinde and Rashidi Ladoja/Lanlehin/Sarafa Alli forming an alliance etc.

Before exiting Ibadan days ago, I was on radio with Egbon Michael Oluwashogo Olatunbosun wherein he played clips of Oshimhole’s vituperative campaign against Eze-Iyamu in 2016. He added that the present alliance between both men shows that “politicians are shameless”. I disagreed with him, adding that the shameless and brainless are not the politicians but those who kill and maim and get killed and maimed on their behalf.
.
In a nutshell, over the years, what the alliances and re-concilliations have shown is that politicians don’t care much about these so-called feuds; for, the most important thing for them is “interest”—-which, of course, is like pendulum. Only fanatic supporters kill and maim. We have seen it in the Aregbesola-Oyinlola/Omisore debacle in Osun, in the Fayemi-Oni relationship in Ekiti, in the Tinubu-Obanikoro/Ogunlewe feud in Lagos, in the Elrufai-Buhari case, and so on. Today, except for a few who were not active participants, most casualties of these crises have been forgotten, with tales of their willful idiocy deservedly buried in obscurity. It’s left for those still around to decide if they want to be horrible statistics of crises instigated by these promiscuous elements (who would gladly dance on the graves of these folks afterwards) on both divides or not.
.
Well, happy birthday to Otunba, Dr., Professor—what else?—-Christopher Adebayo Alao-Akala, JP, PSC, abbl.