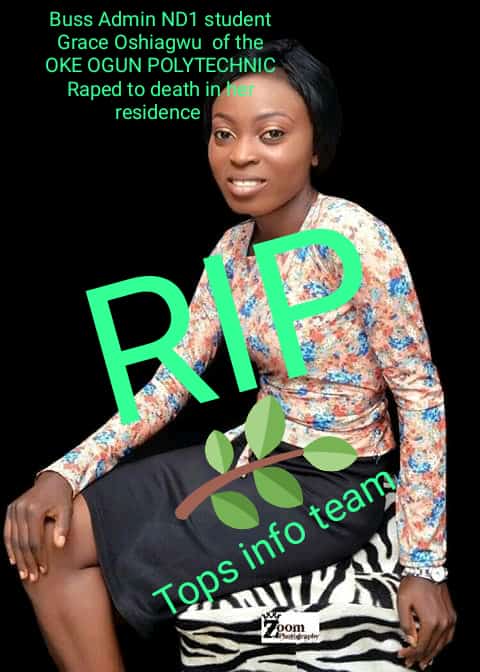 Another female student has reportedly been raped to death in Akinyele area of Ibadan.

The news of her rape is currently trending on the social media.

According to report, “Grace Oshiagwuc an ND1 student of The Oke Ogun Polytechnic Saki was raped to death at her parents’ residence around Idi Ori, Sasa, Ojoo of Akinyele local government.”

But the police, in its reaction, said that “One Grace Oshiagwu ‘f’ aged 21 yrs, was macheted on her head in a church mission building at Idi-ori Area Shasha off Expressway by unknown assailant(s) today 13/06/2020 about 3.00 pm.

”Investigation has commenced into the matter and the Police Tactical teams are on the trail of the assailant(s). While efforts intensified, we want to continue to solicit for credible information from members of the communities around the area and the general public to unravel the misery behind these dastard killings.”

Her corpse has been deposited at Adeoyo State Hospital Ring road, Ibadan, for autopsy.

OYOINSIGHT.COM recalls that Barakat Bello, an 18-year-old undergraduate, was also raped to death earlier this month in Akinyele local government. Few days after, Azeezat Somuyiwa, who was 7-month old pregnant, was killed in similar manner.