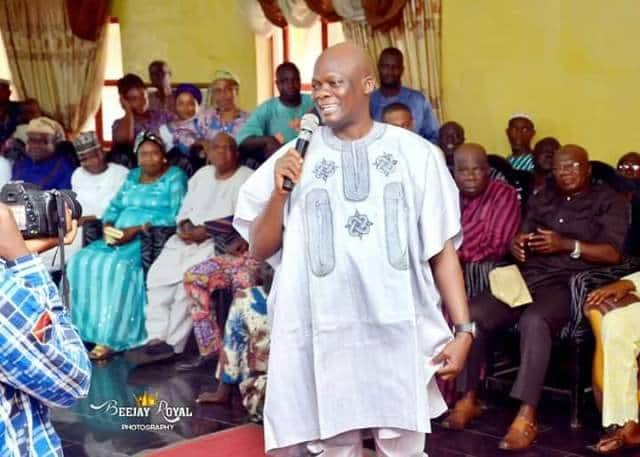 The Senator representing Oyo Central Senatorial District, Oloye Teslim Folarin has fulfilled his promise by donating N2million to the victims of the razed Akesan Market.

This was disclosed on Friday by the three-term Senator’s Special Adviser on Media and Publicity, Com. YSO Olaniyi. According to the spokesperson, the Two Million Naira donation was given to the victims of the razed Akesan Market through the Chairman of Oyo Metropolitan Development Association, Archbishop Ayo Ladigbolu (rtd).

The ancient Akesan market, also known as Oja Oba, located at the centre of the town and few metres to the palace of the Alaafin of Oyo, His Imperial Majesty Oba (Dr.) Lamidi Adeyemi III, was razed by fire in the wee hours of Sunday, January 5th 2020, consuming all shops and goods worth over N20 billion.

It will be recalled that Senator Folarin, in the wake of the Akesan Market inferno, alerted the officials of the Federal Ministry of Humanitarian Resources and Disaster Management purposely for provisions of adequate relief and support items to those who have lost their livelihoods, properties and wares to the fire incident.

“Senator Folarin was in london when the sad incident and he cut short his trip to London because of the inferno, promised the victims of his support and government’s assistance. He and his brother, Hon. Skimeh swiftly facilitated the Federal Government’s intervention through NEMA. The N2million is his personal contribution to relief the affected traders” Com. Olaniyi said.

Oloye Folarin while reiterating his commitment to qualitative representation of the people of Oyo Central in the Nigerian Senate, promised equitable distributions of dividends of democracy in the 11 LGAs of the district.